To Indigenous People, Salmon is the Spirit That Swims
The Swimmers short documentary, shows the importance of the Salmon to First Nations how their cycle shows a clear display of the health of mother nature.

Swimmers, is produced by Bev Sellars and contains powerful messages about the importance of indigenous laws which align with the laws of nature.  The Northern Secwepemc te Qelmucw (NStQ) treaty team is using the video in their community engagement sessions, it is relevant to their objectives in treaty.

Progress has been a long time coming and the pace has picked up!

Canada announced a major policy change which will ensure treaty will not result in a first nation being forced to give up tax status on Reserve Lands or previously designated IR’s which are converted to treaty settlement lands.
Canada announces this change in recognition of and as a component of their approach to reconciliation and realization of self-determination which is a positive action – which did not come easily as a number of first nations including ‘lead tables’ such as Kitsumkalum, Kitselas and Metlakatla have been promoting this reality for a number of years as a necessary outcome to achieve treaty agreements.
Other significant changes of late include:

reconciliation, besides monthly financial bank duties, what does it mean?

“In the end, reconciliation is a spiritual process, which requires more than just a legal framework.  It has to happen in the heart and minds of people”
Nelson Mandela, circa 2012
​

The First Nation Summit Chief Negotiator session for September 2021 had a presentation by Mr. Peter Walters, giving an overview of the mechanisms of the provincial government behind the negotiators at your table.

Tripartite talks that are decades in the making indicate the importance of establishing government to government relationships. The bureaucracy of government might not be the most interesting subject to seek to understand, but Mr. Peter Walters does a nice job in explaining government structure of the province.

​A theme at the summit was concern around the time spent waiting for the crown governments movement on action items and catching up new negotiators as there seems to be a high turn-over rate. It is imperative to have the right people at the table.

​These videos and more can be found at ​www.peterwalters.ca
​

June 2021, the community of Kitselas of the Tsimshian Nation went to the poles and elected, almost an entirely new leadership team.
​
CONGRATULATIONS! Kitselas Leaders, Chief Glenn Bennett, incumbent CJ and the rest of the leadership team. ​

Tsimshian Treaty Society express condolences to the Nisga'a Nation as they mourn the loss of Dr Joseph Gosnell.
The lessons he taught, the love he gave, the way he cared for people... all those live on in you.

world pandemic era and treaty negotiations in northern bc

After numerous delays, Gitga’at First Nation has managed to complete its community elections. Fortunately, having a custom election code, where they have the flexibility to adapt to the current conditions, and in coordination with One Feather, community members were able to select their leadership electronically.

All the best to you during your three year term!
Learn more and get all COVID-19 updates at www.fnha.ca/coronavirus

* The Simgigat – Nisga’a Chieftains; The Halayt is often referred to as a spiritual leader, medicine man or doctor (https://www.nisgaanation.ca/sites/default/files/Hoobiyee-2012.pdf)
February 21-22, 2020
Hobiyee 2020, 50th ANNIVERSARY of the Gitlaxt’aamiks Ceremonial Dance Group as their community hosts the annual event marking the New Year for Nisga’a.

Also adding to this, an additional event following the Grand Entry, the 2020 All Native Tournament Masters Champions, the Gitlaxt’aamiks Gitmidiik Masters, were introduced.

*The Halayt-Simgigat studied the Buxw-laks moon, the moon of February, and they made note of the different shapes leading up to the full moon. Over time, 3 they observed that whenever the first crescent moon (thin-shaped) is in the shape of the Hoobix – the bowl of the Nisga’a wooden spoon with the ends pointing upward, this meant abundant resources in the harvesting seasons to follow in K’alii-Aksim Lisims (the Nass Valley). The oolichans would be plentiful, the salmon … berries … and various other resources important to the Nisga’a; all in all, a bountiful year predicted. 2019 is the year communities in Tsimshian country will be expressing themselves and choosing who will lead through a new term.

It is an election year like no other. Not only will there be a federal election out of Ottawa, but also, the Crown’s seven Tsimshian Indian Act bands in the North West of British Columbia have or will be taking to the polls this year.

Kitsumkalum community members expressed confidence in their leadership in February where the community elected in the same Chief Councillor and all Councillors as before, except one new community official joining the team for the two-year term.

Closing out 2019, Gitga’at First Nation community will be voting in November. 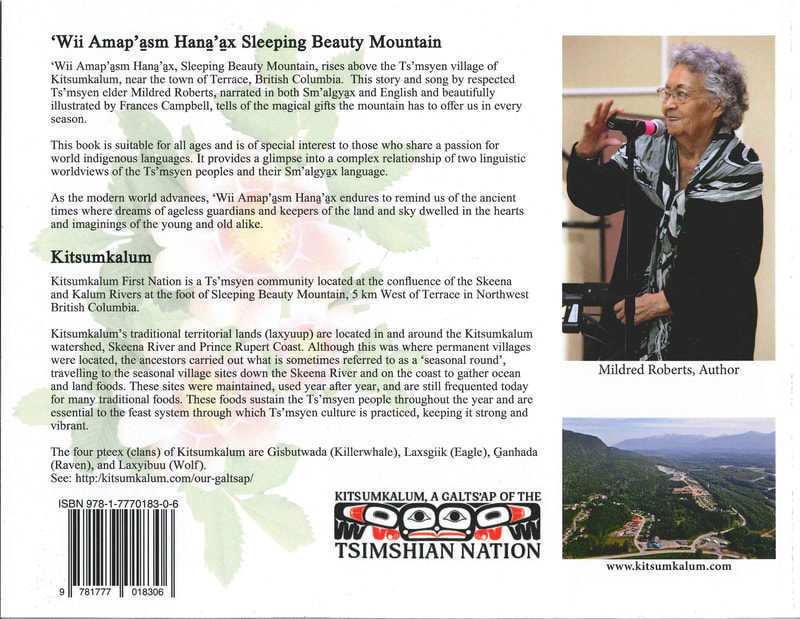 Mildred actively practiced and taught art and language; she was a storyteller contributing generously to the oral history of the people of Kitsumkalum, a community in the Ts‘msyen territory of the coast.

A Sm‘algya̱x/English book, A story and song narrated in both Sm’algya̱x and English that provides a glimpse into the worldview of Ts‘msyen people and their relationship with our mother earth.

This book is suitable for all ages and available for purchase at House of Sim-oi-ghets in Kitsumkalum and Misty River books in downtown Terrace.

Though it has been quiet on the TFN Treaty Website, the Communities within Tsimshian Territory have been busy.

Every month, Metlakatla, Kitsumkalum and Kitselas spend three days at the table with the Crown Governments, Canada and British Columbia negotiating toward settling a Final Agreement, updated information can be found through each community treaty office, their web page or social media account.

Metlakatla First Nation set the stage for negotiating their final agreements by signing their Agreement in Principle with the Crown Governments in February 2019, bypassing the formal referendum approach and crown government procedures that could stretch this stage up to 2 years.
​
Congratulations to Kitsumkalum First Nation; the community expressed confidence in their leadership by electing the same team of leadership at their council elections as the end of February. There was one change, Aaron Horner joins the team after Susan Spalding didn’t run this term.  After serving ten terms, she has recently become a proud grandma and will be focusing on nurturing her growing family for the time being.
The new council team at Kitsumkalum is as follows:
Chief Councillor
Don Roberts

Gitga’at First Nation and Kitasoo/Xai’xais First Nation celebrate the release of IMAX documentary “Great Bear Rain Forest: Land of the Spirit Bear” a feature-length documentary which premiered February 12 and is now open to the public in Vancouver, Victoria, Toronto and Sudbury. The communities teamed up with Heilsuk Nation and Pacific Wild with the creation of this picture of one of the most remote places on the planet.

You can access community web sites through a link under TFN Treaty's "Affiliates" link. September 17, 2018
​This week, Kitsumkalum (Kalum) Treaty Office hosted a community information session. The theme of the evenings' presentations was "Self Governance".

Full Leadership was in attendance to speak to the latest events happening at the negotiation table with Kalum and the Crown governments. Kalum sits with its sister community, Kitselas First Nation where they are at Stage Five of the treaty process, the Final Agreement Stage.

Chief Negotiator, Gerald Wesley gave a snapshot highlighting efforts made at the table. It seems that progress is on track and is in line with the strategic plan developed in 2017. Given the work happening in the community, Gerald assures the community members in attendance, that Kalum is ready to take the reigns and grow out from under the Department of Indian Affairs.

Headlining the night was Angela Wesley, hailing from post-treaty community Huu-ay-aht First Nation where she helps lead the way with a team of community leaders in determining their future. Angela carries a wealth of information to share from her nation's experience, seven years of self-determination and thriving out from under the Indian Act.

Where do you start in determining self-government?

Chief Don Roberts said in his opening statement, "When elders talk about their territories, that is the beginning of self-governance."

Community engagement sessions are one of the most critical tasks for a treaty office, informing citizens that come out seeking to know more is essential to keep efforts on track at the table.

At the Treaty Table - Kitselas and Kitsumkalum Communities - September 2016 Tripartite negotiations resumed after a short summer break with Canada hosting the September meeting in Vancouver. This round was cut short as Canada’s team was not all present and those present, had little authority over the important agenda item: fish and marine requirements. Missing was their chief negotiator. Also Department of Fisheries and Oceans was not present at the table where chief negotiators reviewed the fisheries working group report. Kitsumkalum and Kitselas re-iterated that if fish is not included in a final agreement, there will be no treaty.

Canada was presented with a copy of a summary report the North Coast Skeena First Nations Stewardship Society "North Coast Marine Plan Overview" which "is to provide recommendations for achieving ecosystem health, social and cultural well being, and economic development through an ecosystem-based approach to planning and management. The plan provides recommendations for developing and maintaining resilient marine ecosystems and sustainable economies for North Coast Communities"

BC Treaty Commission, Tom Happynook chaired the meeting and after all teams agreed to the Record of Decision from June’s talks, new business began.

This round reviewed reports from the working groups for Fisheries, Main-table, Legal, Lands Technical, Water Technical and Forestry.Working groups meet through out the year continually between scheduled negotiations.

Main-table Working Group business included, Environmental Chapter, Kalum and Kitselas reported out on the Fish Survey that has been conducted during the summer. Hydro Electric Water Assessments were discussed; Kitselas and Kitsumkalum will identify related water areas that may be included in the Water Chapter. Harvest Areas for Wildlife, Fisheries and Gathering purposes remains an issue to be addressed at the next meeting. Chapter reviews also include Self-Government and Gathering.

Next round of discussions will be hosted by BC in Victoria, watch for updates in early October.

It was a busy week at the negotiation table in Gitaus during the last week of June. Kitselas First Nation hosted the latest round of tripartite talks for both Kitsumkalum and Kitselas communities. Canada and BC negotiation teams were welcomed in and treated to an informative tour of the traditional Tsimshian territory as well as fresh traditional food. CJ of the Kitselas Treaty office shared many stories of the deep history and culture of the Kitselas Canyon.
At the table, the teams addressed language requirements on important agreement provisions in Lands and Resources, Fisheries, and Culture and Heritage.
BC Treaty commission was able to chair the meetings and were made available along with the rest of the teams for one on one discussion with the community participants that came looking for answers.
It was a fast paced long week of talks leading into the first long weekend of the summer and it ended in good spirits. It seems each round at the table strengthens the nation to nation relationship. 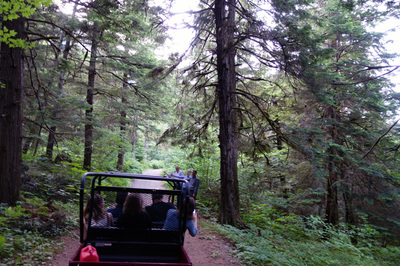 Congratulations to the Gitga’at First Nation on the success of their recent election which was held on November 25, 2015!

TFN Treaty Society extends congratulations to Gitga’at First Nations community members for exercising their democratic right in selecting their leaders. Choices made are a tribute to the strength and commitment in the governance of the Gitga’at community.